The euphemism of “overpopulation” is in reality companion animals wandering the streets and roaming the countryside; puppies and kittens being cranked out of factory-type mills; crowded pet shops selling companion animals; unwanted dogs and cats euthanized in shelters. And worse.

One of ISAR’s tools in our effort to educate the public and companion animal custodians specifically about the moral and practical necessity of spaying/neutering companion animals, has been our successful billboard campaign.

For at least a quarter-century, ISAR’s billboards have reached countless members of the public by advertising the spay/neuter message.

Outdoor advertising on billboards has consistently proven to be a relatively inexpensive, yet powerfully effective, means to inform large numbers of people about this inhumane problem of unquestioned importance. ISAR’s informative spay/neuter billboards are one of the most effective ways to spread the pet overpopulation solution of spay and neuter. Billboards generate countless marketing impressions on the motoring public, thus assuring that ISAR’s message will be seen. 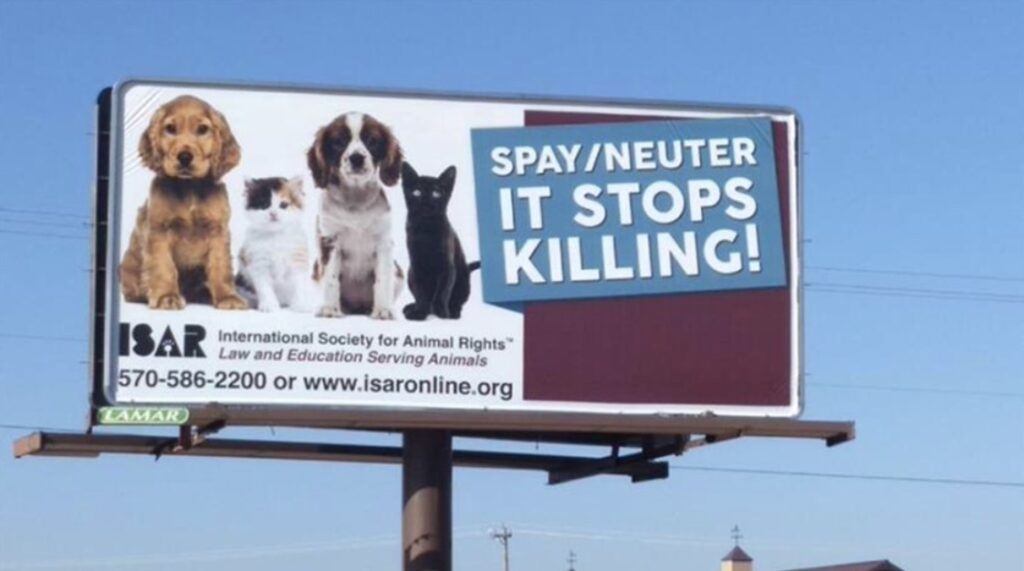 We know our message is getting through to motorists throughout the United States because of the feedback we receive from them. For example, “In case you are wondering, your billboards are effective because this is how I learned of your organization!”  “I was thrilled to see two on highway 98, between Navarre and Fort Walton Beach [Florida]!” “Thank you for getting in the game to reduce the number of unwanted dogs and cats.” “Great marketing!!! We saw one of these billboards on our way to Florida!!!!” 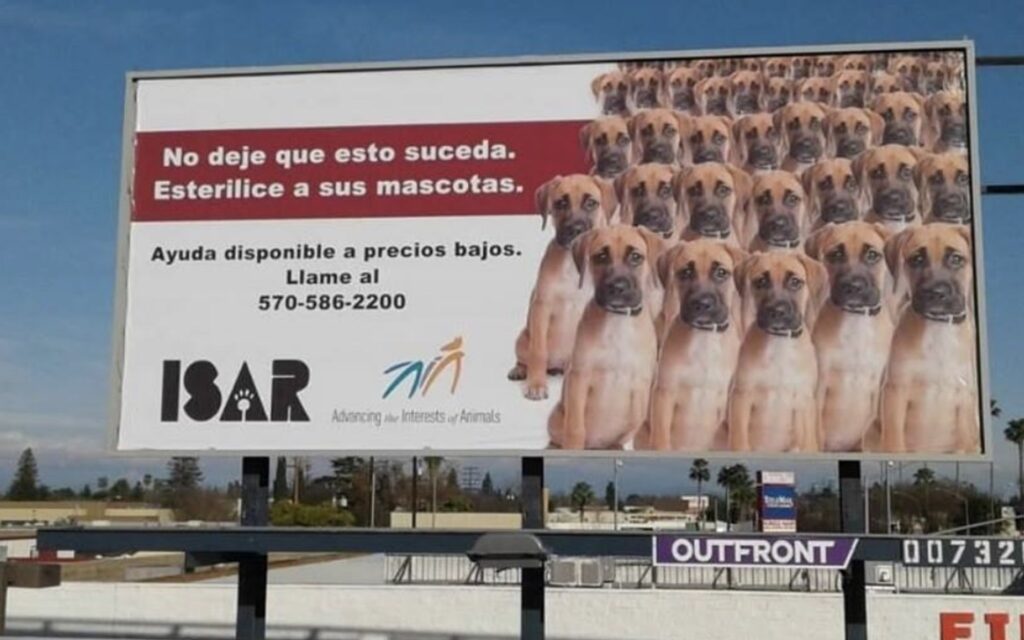 Viewed daily by thousands of motorists, residents, visitors and owners of companion animals, the Spanish language billboards have become an integral part of ISAR’s Spanish Language Spay/Neuter Program, concentrating on locations with Spanish-speakers.

Animals Today Radio is the only broadcasting and streaming program of its kind in America. Since its inception on February 8, 2009, ISAR has been its principal sponsor, because we believe that a serious nationwide (indeed, international) radio program addressing important contemporary animal issues has become a moral and practical imperative.

On the Air “En Español” has spread ISAR’s spay neuter message across the United States.

Those listening to KMXX 99.3 and KSEH 94.5 radio stations in California’s Imperial Valley—most of whose residents speak Spanish—have heard a vital Public Service Announcement (PSA) in Spanish six times each day: “In the U.S., 70,000 puppies and kittens are born every day … If you let your animal have a litter, even just one, these kittens and puppies will go on to produce more offspring—and very quickly, that adds up to many unwanted dogs and cats. Countless dogs and cats are killed in shelters each year because there is nowhere for them to go.”

Listeners have been advised to act responsibly by spaying and neutering their pets: “Your veterinarian or a low-cost clinic in your area can do the procedure. Fixed cats are less likely to get certain cancers and less likely to bite, fight, roam or run away.”

“So, for a healthier and happier pet and to help improve the pet overpopulation problem, make sure you get your animals fixed right away.”

Sponsored by ISAR and Advancing the Interests of Animals (AIA), this PSA has been heard on radio stations serving Spanish-speaking audiences across America from WHAT 1340, Philadelphia’s top Spanish language radio station, to WPSP 1190 in Palm Beach, Florida, which provides programming for Hispanics ages 25 and older, to KGRW 94 in Amarillo, which is the largest city in the Texas Panhandle. These stations—and dozens more like them—have been getting out the word on the moral and practical necessity of spaying and neutering pets.

Just as it is literally incalculable as to how many feral cats there are in the world, the United States, or in New York City, there are literally countless such felines in New York City and thus in the Borough of Brooklyn. The sad fact is that no one knows, or ever will, how many.

Regardless of the numbers, a recent feature-length documentary aimed at exposing that one of the City’s dirty secrets was the number of feral cats in Brooklyn. Lacking funds to complete the film, the producers approached ISAR which made a sizeable contribution enabling the film to be completed and released.

The film’s producers told thousands of its social media supporters, “We made our Kickstarter goal, thanks to The International Society for Animal Rights (ISAR), one of the oldest animal rights organizations in the U.S. They came in with a sizable contribution, putting us over the top! Thank you, ISAR!”