ISAR has long been in the forefront of the battle against dog and cat overpopulation. We have opposed commercial and backyard breeding. We have condemned pet shops. We have exposed the shocking statistics of dog and cat euthanasia. We have promoted shelter accountability laws. We have vigorously and consistently supported spay-neuter programs, and recommended that all dogs and cats be rendered incapable of reproducing. We have provided start-up information to persons wishing to open spay/neuter clinics. We have organized the first international conference on pet overpopulation. And More. The scope of overpopulation in the United States is enormous, and often even people with the best of intentions are overwhelmed by the problem, feeling swamped by the numbers and immobilized by their magnitude. With good reason. But dedicated animal activists, on their own with no help from government, can make a huge difference, as the following report shows.

Pecos People for Animal Welfare Society, Inc. (PAWS), consists of a small group of dedicated volunteers in rural northern New Mexico, an area of large distances and great poverty where too often animal suffering is common and overpopulation is a fact of daily life. Some years ago, under the leadership of Dr. Asenath LaRue, a psychologist, the PAWS people decided to do some thing about the problem. And they did. Based on the figures that appear in the PAWS report, commonsense tells us that countless numbers of unwanted animal births have been prevented. The PAWS report can serve as a blueprint for others who want to attack the overpopulation problem in a direct and relatively inexpensive manner. ISAR commends their efforts, and urges that efforts like theirs be supported to the fullest extent possible.1

Program Objectives and Funding History: Pecos People for Animal Welfare Society, Inc. (PAWS) strives to reduce the overpopulation of dogs and cats in small villages and rural communities in San Miguel County, NM, and adjacent areas of Santa Fe and Guadelupe counties. This is a large, sparsely populated area (1,500 square miles, about 10,000 people). Incomes are low, and there are many homeless or poorly tended animals.

To increase participation in spaying and neutering, PAWS started an outreach program designed to address pet overpopulation in rural areas. From November 1995 through January 1996, efforts concentrated on fundraising, to obtain the funds needed to purchase a used van, equip it for safe transport of animals, and begin the outreach program. Through funds provided by the McCune Foundation and others, PAWS purchased and equipped a van (the “PAWS-Mobile”) to transport dogs and cats from small villages and rural areas in San Miguel County, NM, to veterinary clinics for spaying, neutering, and vaccinations. The “PAWS-Mobile” makes regular stops in several small communities, picking up dogs and cats and transporting them to veterinary clinics for surgery.

Operating costs are partially offset by funds received from several charitable organizations and individuals. This support is crucial in light of the rural, low-income area served and is much appreciated.

Because the program has been staffed by volunteers, costs are kept to a minimum and by contracting with local veterinarians, PAWS has avoided overhead such as rental of space, utilities, and administrative salaries.

Success: The PAWS-Mobile program has exceeded initial goals. The following points are highlights of operation.

1. Spays and neuters have markedly increased because of the PAWS-Mobile.In the first nine months of operation, PAWS spayed or neutered a total of 133 animals through the PAWS-Mobile, more than was expected for the entire first year. This was not at the expense of PAWS’ regular, in-clinic program, which spayed/neutered an additional 124 animals during this time. Overall, spay/neuter activity was more than doubled relative to 1995 due to the success of the PAWS-Mobile (see Figure A).

During the second year of operation, 179 animals were spayed or neutered through the outreach program. This complemented the in-clinic program, through which an additional 177 animals were altered, bringing the annual total to 356.

Since 1993, PAWS has spayed or neutered more than 1,000 rural animals. This might not mean much if the program was operating in a city, but considering the far-flung communities PAWS serves, this is an admirable accomplishment. 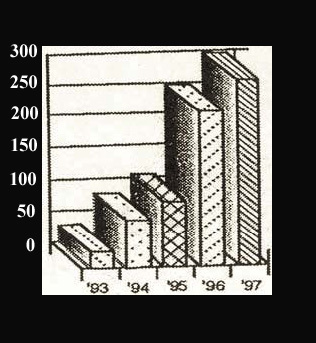 The PAWS-Mobile has traveled more than 15,000 miles, stopping in 12 rural communities. From the village of Anton Chico alone, 50 animals were altered, many from families who had never taken an animal to a veterinarian. Sixty percent of PAWS-Mobile clients are Hispanic, 38% Anglo, and 2% are of other heritage, including Native American. For many, even the low fees ($25 spay, $20 neuter) have been difficult financially. About 15% of surgeries have been performed at no cost to the client (due to marked financial hardship or for foster animals).

3. The PAWS-Mobile is addressing critical needs with respect to pet population.

Dog spays account for 50% of the van activity, dog neuters another 21 % (see Figure B). This is important because dog overpopulation is the primary problem in the area PAWS serves. 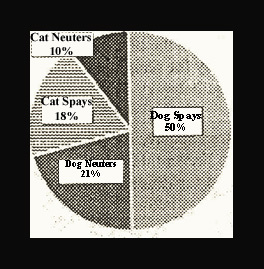 4. The PAWS-Mobile itself is good advertising.With a license plate that says PAWS and colorful magnetic signs, the van attracts attention, and people often come up wherever it is stopped to inquire about costs and schedules.

5. Volunteers have come forward to help with the program. Many volunteers have helped by driving or riding with the van, loading animals, or through advertising the program in their communities. Despite high volunteer involvement, the van has not been able to operate every week. When active volunteers are out of town or committed to other activities, the number of PAWS-Mobile runs must be limited to two or three in some months. Recruiting and training more volunteers, or paying a small stipend to drivers, will help ensure that the van operates consistently at full capacity.

Looking ahead: PAWS sees no downward trend as yet in the need for rural outreach. In a telephone survey of area residents, reducing pet overpopulation was the most frequently listed need pertaining to animals (see Figure C). 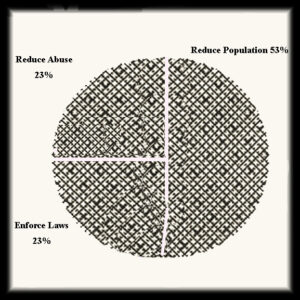 A new hurdle must be overcome in PAWS’ third year. Two key volunteers are working full time and cannot drive the van as much as before. To fill the gap, and to reduce the logistical complications of shuttling the van from one driver’s home to the next, PAWS is considering paying a driver a small stipend (estimated $1,800 per year) to make regularly scheduled stops and to be responsible for maintaining the van. This would reduce the funds available for spay/neuter, but would help to ensure continuity in service and prevent volunteer burn-out.

Financial Summary (11/1/95-10/9/96):
PAWS purchased a modest, used vehicle (a 1991 Dodge Caravan) that can transport up to eight animals at a time. Administration, scheduling, publicity, and driving are performed by volunteers. Participating veterinarians are paid $50 per spay and $40 per neuter from the PAWS-Mobile fund; the fund also provides for the cost of annual vaccinations, at one-half the usual rate. Clients are asked to pay one-half the surgical costs, but approximately 15% of surgeries are performed at no charge to the client. The average cost to the program for each surgery plus basic vaccination has been $27.51, which is below the initially projected cost of $30 per animal.

1 The Report contains ethnic information solely because one of the funding foundations required that its resources be expended in a certain manner.